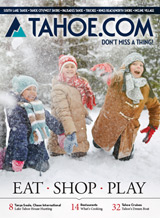 The Tahoe Daily Tribune was founded on June 26, 1958 by Frank and Mary Chase. It was a weekly newspaper called the Tahoe-Sierra Tribune. The Chases sold the paper to Scripps League of Newspapers in 1963. It was acquired by Reno-based Swift Newspapers, now Swift Communications, in August of 1975.

The Tahoe Daily Tribune covers the southern portion of Lake Tahoe and the community of Incline Village, Nevada. During winter, 14 ski resorts around the lake make this a world-class ski destination. The area is also a world-class destination resort for summer activities.