Edgewood Tahoe is the definition of elegance. From beautiful accommodations to a well-appointed spa, Edgewood Tahoe is designed for those who enjoy the finer things in life. But what sets Edgewood apart is its golf course. The golf course at Edgewood Tahoe is set, as the name implies, against the Nevada forest and along the shore of Lake Tahoe. Renowned within the golfing world for its scenery and design and as the site of several notable golf events since its opening in 1968, the course gained more mainstream fame as the host of the Celebrity Golf Championship, an annual event beginning some 25 years ago. When Edgewood isn’t populated with famous actors, politicians and sports figures, it is a prime location for other special events such as weddings, holiday parties or corporate banquets. Dining choices offered on site include The Bistro Edgewood, Brooks’ Bar & Deck and Edgewood Restaurant. Also located on site is the 8,500-square-foot Spa Edgewood. In an opulent setting and offering service of the highest standards, Spa Edgewood has an extensive menu of salon, facial, massage and body treatments. 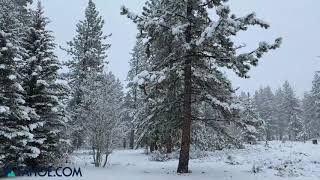 Giveaway
There are no active giveaways at this time. Please check back later.