The Tavern's Cavern: Inside the Stunning Basement Banquet Facilities at Rojo’s Tavern 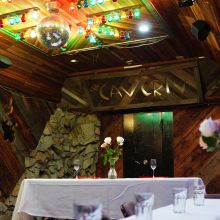 When a young Joe Hansen was spending his 1976 summer nights sweating alongside friends and other South Tahoe locals to renovate the basement of the recently purchased Rojo’s Tavern, he had no idea of the legacy he was creating.

“I used to come here in the pickup and would just grab people from town to help out,” Joe said, reclining in a seat in the dining area of the restaurant that he had owned and operated for almost 50 years.

Joe first became acquainted with the historic tavern while patronizing it after softball games with other industry workers. Then only 26 years old, he purchased the restaurant with nothing more than a vision. He started working on the basement renovation right away.

“I didn’t have a lot of money,” Joe said. “I didn’t care about money. I just wanted to get it open. The rest would follow.”

It took Joe, friends, family and even the occasional bar patron over a year and a half, but together they were able to create one of the most unique spaces in the entire Tahoe basin.

Walking down the stairs from the Rojo’s dining area to the remodeled basement is like stepping back in time. Part speakeasy, part underground saloon, the 1,500-square-foot space offers a rustic refuge from the outside world, full of handcrafted detail and unique touches. 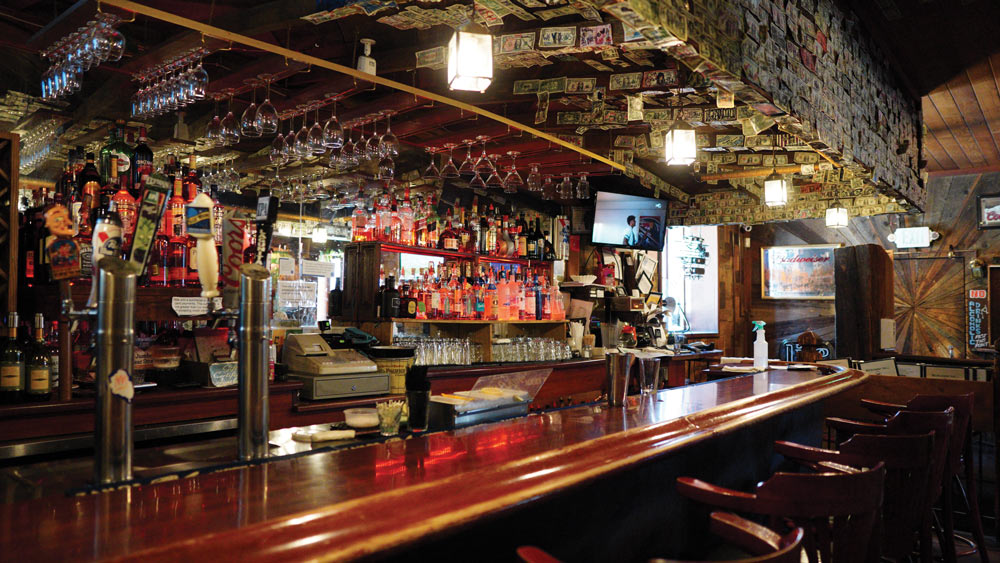 It’s a beautiful room. Joe described it as a mineshaft, like going into a cavern.

The mineshaft feel comes in large part from the building materials that Joe used during his remodel. Without a lot of extra money to spend on exotic wood or stone, he made use of the resources that California itself had to offer. Chief among them is the piñon pine wood that Joe harvested himself from the desert, the same type of woods used in area mine shafts. He hand-selected the granite stones that line the stairwell and walls from a quarry in Rockland, California, shuttling them back up to the lake in the back of his old pickup.

“I had every rock in my hand five times,” Joe said. He shared that one time he loaded so many stones into the bed of his truck that he broke an axle.

Looking up from the piñon and granite, one will notice beautiful redwood lath, another California product, lining the ceiling and various alcoves, every single piece nailed in by hand. A dance floor and small stage dominate the front half of the room, with a dining and bar area in the back.

It’s easy to understand why Joe initially built the space with the idea of hosting music and dancing. In fact, when the basement officially opened on July 2, 1978, it marked the start of the very first disco in Lake Tahoe.
“When I opened the basement, I caught Saturday Night Fever,” Joe said. “We would do disco seven nights a week.” 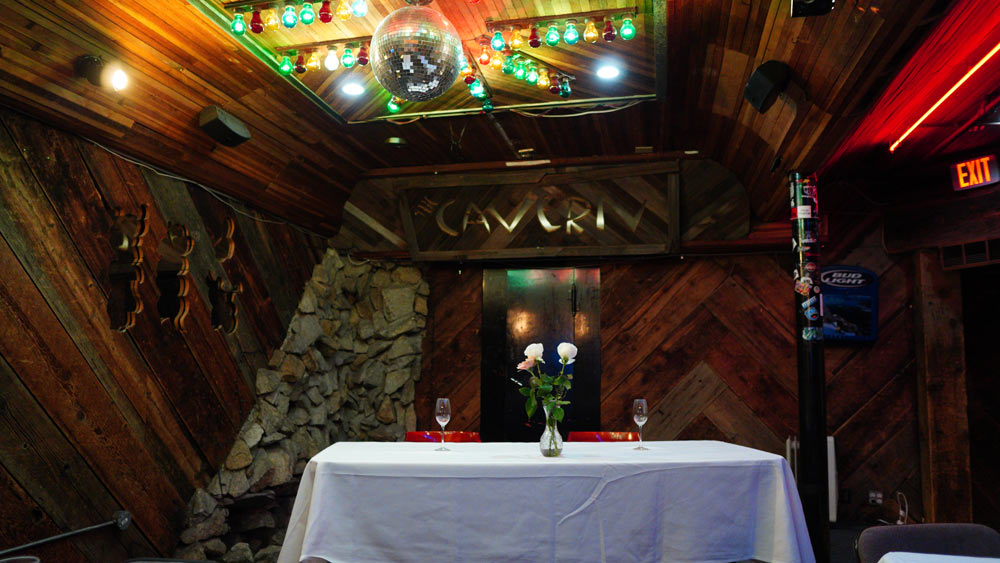 No longer needing to lay his hands on the stone for construction, Joe instead picked up records and served as his own DJ for the disco nights, using the top 100 songs list to inform his choices.
“I thought ‘Why am I going to pay someone else for this? I can do this,’” he said. “I used to spin the records myself behind the bar.”

According to Joe, the nightly discos at Rojo’s were a huge success. Even so, he began to imagine other ways he could make use of the space. In the early ’80s he opened the basement to reservations for parties, weddings and other special events.

“I was always trying to be ahead of the curve,” he said. “Back then winters weren’t even that big. It was a way to build enough revenue.”

Over the coming decades, as Tahoe cemented itself as a premier destination wedding location, Rojo’s experienced great success with such events. The reason for the popularity was simple: “Rustic old Tahoe,” Joe said. “We’ve got a little niche. We can take around 75 people, and they have a great time down there.”

More than 40 years after first opening the basement in Rojo’s there are still frequent music events, but instead of spinning records, the staff has shifted its attention to helping clients plan their dream events in the unique space.

In addition to preparing the space, the staff offers a catered buffet, full bar service and, of course, dancing. They meet with each couple personally to ensure that their needs are met and promise them a night to remember.

Tragically, Joe Hansen passed away in an automobile accident in April 2022. His children, Isaiah and Kjeleena (KJ), are dedicated to continuing his legacy and maintaining the level of trust that Joe built in the Tahoe community over the last 50 years.

Buy a Large Pizza, Get a Kids Pizza Free