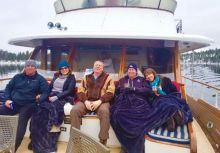 On a sunny Tahoe day, the 80-foot-long Safari Rose floats on a sheet of glassy blue water at its dock at Ski Run Marina in South Lake Tahoe. About 40 guests eagerly climb aboard for a sunset cruise, dispersing between the open-air top deck and luxurious interior cabins. Everyone is smiling and excited as we set out into Big Blue with the sun making its way toward the mountains.

The yacht runs so smoothly that I barely notice we’ve left the dock until we’re about 200 yards away; the only clue is the sudden crisp breeze hitting my face. Our evening’s crew on this luxurious cruise consists of Patrick the bartender, deckhands Noah and Fallon and Captain Clark.

Over the classic rock music coming from the speakers throughout the boat, Captain Clark shares information about the ship. He says it was built in 1959 and still has its original staterooms, along with three restrooms, a bar and two 1,100-horsepower engines. He acknowledges the VIPs on board, those who are celebrating anniversaries and birthdays and firefighters who were down from Alaska to help put out the Caldor Fire.

Armed with complimentary mimosas, most of the people on the top deck turn their chairs around to face the water. Patrick says that Lake Tahoe is 97 percent mineral free, so we’re basically “floating on a body of distilled water.” Captain Clark shares other intriguing knowledge about Lake Tahoe. As we glide over one spot, he says it’s as deep as the entire height of the Empire State Building – with 50 feet to spare. 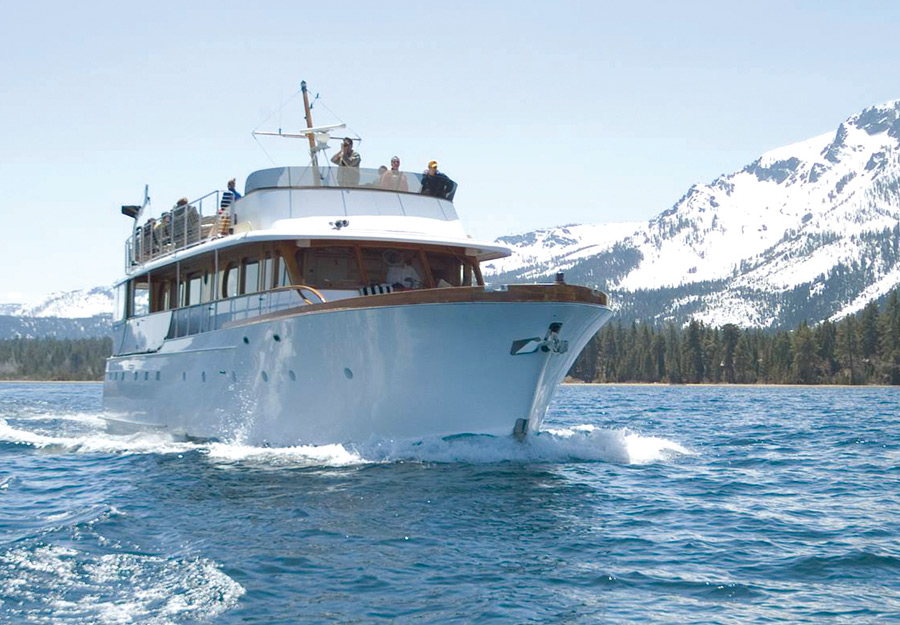 As we continue making our way toward Emerald Bay, everyone is conversing and taking pictures and videos of our surroundings. A bluegrass version of “Here Comes the Sun” now plays in the background, and a seagull swoops down from the boat’s mast and takes a Pringle out of someone’s hand. The seagull, which the crew calls Jonathan, started hanging out on Safari Rose three years ago and stayed when he realized that some of the guests were more than willing to feed him snacks. To be on the safe side, the crew checked with Lake Tahoe Wildlife Care to make sure it was okay to feed Jonathan, and the wildlife staff laughed and said that seagulls’ stomach acid is so strong they can pretty much eat anything.

As we approach Emerald Bay, Captain Clark shares the history of Safari Rose. The 3M company originally had it built to serve as its executive yacht, and over the years it worked its way through the Panama Canal to Alaska. That’s where its current owner, Steve Dunham, found it.

“He’s an incredible woodworker and spent a year up in Seattle renovating it,” Captain Clark says, adding that Dunham previously restored a 1950s 40-foot wooden boat called the Tahoe. With Safari Rose, Dunham made several upgrades, such as moving the boat’s exhaust off to the side so he could install a staircase and refinishing all the woodwork. When Dunham completed his restoration, he searched for the biggest boat trailer he could find on the West Coast and used it to bring Safari Rose to Lake Tahoe.

Captain Clark, a seasoned cruise ship captain with 43 years of experience on the water, caught wind of Dunham bringing the Safari Rose to the lake and reached out. Clark has now been steering Lake Tahoe’s largest and most elegant tour boat for 18 years, calling himself the “bus driver.” Out of all the boats, yachts and ships he’s directed, Safari Rose is his favorite.

“This is so easy to handle and maneuver,” he says. “At 80 tons, it just plows through the water.” 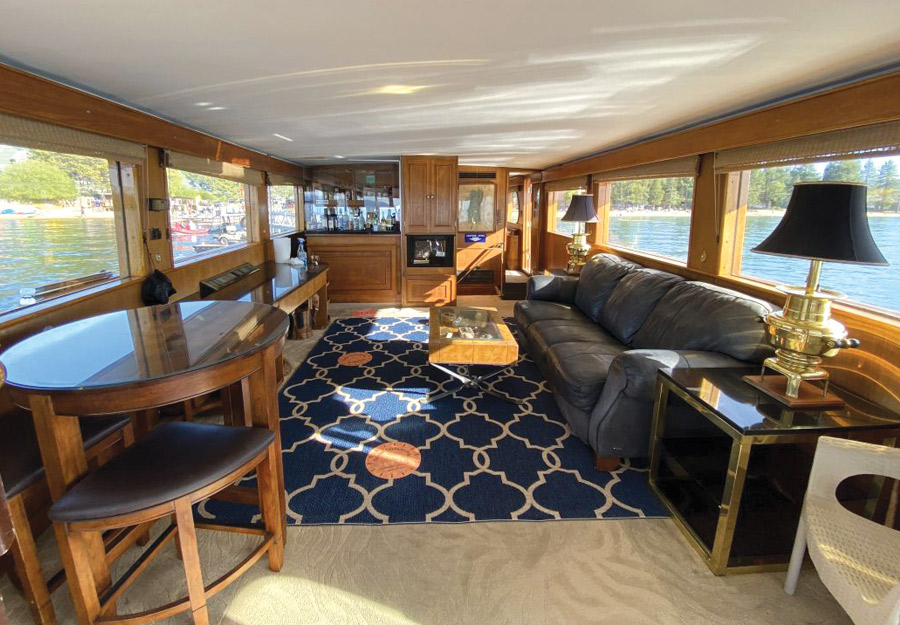 In Emerald Bay Captain Clark gets on the microphone again and points out a bald eagle, describes the history of the Vikingsholm mansion and shows off Fannette Island. For the birthday girl on board, he pulls the Rose up to the island and urges her to touch the lucky rock while her friends laugh with delight.

Safari Rose is one of the few boats that takes groups on Lake Tahoe year-round, and Captain Clark admits that he likes cruising in the winter months even better than in the summer.

“In the winter we get the heaters fired up,” he says. “Everything’s white around us and the contrast makes the lake look so beautiful.”

Winter guests can enjoy the indoor heated salon and cozy fireplace or sit by heaters on the beautiful enclosed fantail or sundeck.

With that, under a pink alpenglow sunset, we glide back into the dock listening to a Fleetwood Mac song.

“Just another lousy day on the lake,” Captain Clark says over the microphone, and everyone laughs, thinking that the sarcastic comment is the farthest thing from the truth.