Sailing on a Cloud 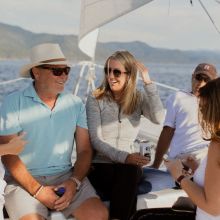 For many, the thought of sailing on a catamaran will conjure visions of Caribbean sunshine and salty waves, but a cruise on the Sierra Cloud brings a traditionally tropical experience to the breathtaking alpine environment of the Tahoe basin.

Owned and operated by Action Water Sports (AWS) in Incline Village, Sierra Cloud is a 55-foot catamaran that spends its summers docked at the Hyatt in Incline. Custom built in Port Townsend, Washington, in 1989 and shipped directly from the Olympic Peninsula to Lake Tahoe, the boat has spent its entire life on the lake. It is now the only commercial catamaran on Tahoe, offering visitors and locals the opportunity to float smoothly across the lake like the very clouds it is named for.

Now entering her seventh year with AWS, Higgins has been familiar with Sierra Cloud since the beginning of her tenure. In fact, her first cruise on the boat took place on her very first day of work. She had sailed on a catamaran before, in Mexico, but she says that there is something more intimate about taking a cruise across a high alpine lake.

More than a half dozen years later, Higgins is still as taken with Sierra Cloud cruises as she was on her first day. She is particularly partial to the sunset cruise, which leaves the Hyatt dock at 5 p.m. every summer evening, right as it is starting to get a bit breezier on the lake.

In addition to the sunset cruise, AWS offers two other daily cruises. On Saturdays and Sundays a fourth morning cruise is added to the itinerary. Sierra Cloud is also available for private charters to host weddings or other parties.

The boat can hold up to 49 people, but Higgins says that typically there are about 30 passengers plus a captain and two crew members. After passengers board from the Hyatt pier, the captain motors out to open water before giving the crew orders to hoist the sail.

“They grab the rope and in sync they call ‘1-2-3,’” says Higgins, recalling the delightful moment when the wind first fills the sails. “You can just feel the power. It pulls the boat right along.” 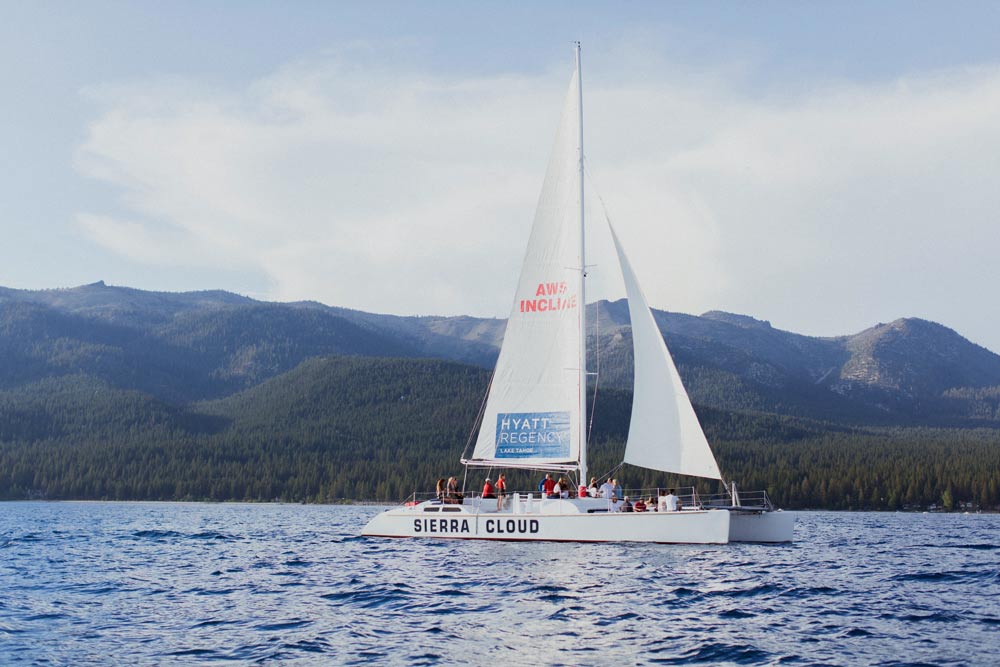 Embarking from the north end of the lake, the captain directs Sierra Cloud along the scenic east shore while the passengers sit back and take in the views and the crews serve a variety of drinks and light appetizers. Some of the particularly adventurous passengers will choose to recline on one of two nets in the bow of the boat.

Along the way, both captain and crew point out landmarks and some particularly impressive lakefront mansions. Once reaching the historic Thunderbird Lodge, Sierra Cloud cuts back across Crystal Bay, site of the deepest point of Lake Tahoe, and returns to the Hyatt dock.

AWS estimates that after more than two decades gliding around the lake, Sierra Cloud is set to reach its 10,000th cruise this summer, and it shows no signs of slowing. In fact, AWS hopes to build upon the magic the catamaran has created with the addition of a larger sister ship.

A complement to Sierra Cloud, the new catamaran would accommodate 80 to 100 people, host sit-down dinners and be able to run into the winter months. The owner of AWS has even gone so far as to pick out a name that invokes the blissful experience that could be created by sailing underneath snow-capped peaks: Cloud Nine. He envisions the pair of Clouds moving with the wind around the legendary Lake Tahoe.

“Ultimately that’s his goal,” Higgins says, “and I think it will happen.”

Until then, a cruise on Sierra Cloud is the best way to enjoy the breathtaking scenery of Lake Tahoe’s northern and eastern shores.