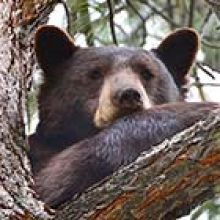 It's hard to imagine someone visiting or living at Lake Tahoe who doesn't appreciate and respect nature. A large part of the reason that so many people choose to be here is the chance to enjoy the trees, mountains and wildlife of the High Sierra. So when people engage in behavior that is harmful to these aspects of the environment, it almost has to be through ignorance or carelessness rather than malice. But regardless of the intent, there is a certain activity that is almost guaranteed to end in a bad result for the natural world, and that activity is providing food for the area's native black bear population.

Sometimes people think that they’re doing wildlife a favor by making food available for the animals.                    But more commonly, it is lifestyle choices made by individuals who make food available to bears in the form of trash or garbage. In other instances, homes and buildings are not adequately secured, and the food within tempts these canny creatures into making unwise choices.

The problem is not so much that human food and food remains are not healthy for bears (although that is certainly true). The larger issue is that once the animals become used to getting food in this manner, they begin to lose their natural inclination to avoid humans. This leads to conflict, and conflict between bears and humans ends badly for all involved, most usually in death for the bear.

Depending upon the jurisdiction in which a Tahoe bear becomes too used to humans or comes to associate homes or trash cans with food, it may be put down immediately or captured and relocated to a different area. In the latter case, the bear will also usually end up dead as it tries to deal with new surroundings, attempts to navigate obstacles in order to return to its original home or actually does make it back to Tahoe and is deemed to be a repeat offender.

For these reasons, the Incline Village Public Works Department has developed a Bear Smart Incline Village Program.  Tips are offered on how to prevent conflict situations from coming about. For the most part, they involve common-sense behavior relating to your trash, such as not putting garbage out for pick up the night before trash day, and investing in bear-resistant garbage containers. Other tips are not so obvious, but they do make sense when you stop to think about them. These include keeping barbecue grills clean so that the food residue is not a temptation or keeping fruit trees clean and not letting ripe fruit gather on the ground.

Following the suggestions provided by IVGID to help keep the area's bears trash-free and away from humans is not particularly difficult and does have its rewards. Bears are large, wild animals that can kill or injure pets, be a danger to humans and cause thousands of dollars of property damage when they find themselves in certain situations. Working to prevent these situations makes everyone safer and avoids costly confrontations. Another reward for keeping bears from dumpster diving and other bad habits is the satisfaction of knowing that you've done your part to respect the native wildlife of Lake Tahoe, that you've contributed to a peaceful coexistence between nature and humanity.

For some, however, these rewards are not sufficient. When the carrot fails, it's time to use the stick, and in this case the stick exists in the form of a fine system for violations of trash-containment ordinances. Imposing financial charges against those who fail to heed the trash regulations designed to prevent bear problems has encouraged people to take these regulations more seriously, particularly in the commercial sphere. This is particularly important, given that the commercial dumpsters and garbage cans such as those found behind hotels, resorts and restaurants have the potential to provide bears with more garbage food on a more consistent basis than the residential trash cans. But proper trash management is also the responsibility of individuals, and those who do not correctly store their garbage or who put trash out prior to collection day can face fines of up to $1,000 for each instance.

When all is said and done, however, it primarily comes down to a matter of education. IVGID's Madonna Dunbar works to train volunteers to serve in community outreach for the Bear Smart program. She provides people with the tools and resources to let residents know about bear boxes for proper trash storage and containment and how to adopt a Tahoe lifestyle designed to minimize bear and human conflict. Dunbar and the District's Bear Smart program have a comprehensive list of best practices regarding trash in the Tahoe Basin. With minimal effort and just a little education, it's not hard at all to live in such a way as to convey respect and appreciation for the nature and beauty of Lake Tahoe.  For more information, visit www.BearSmartInclineVillage.org.

About the Author R. Keith Rugg

Veteran journalist R. Keith Rugg has worked with several area publications, including a number of years on staff at the Tahoe Daily Tribune and the Reno Gazette-Journal.